Women fall in the finals of 2017 Premier League

It was a tough day at the office for our women’s team on Saturday against Kooyong Lawn.

The 2017 Premier League preliminary final was played on Sunday afternoon at Dendy Park and saw a change in format with the singles being played first. An injury forced Zoe Hives and Gen Lorbergs to sit out the match against Kooyong Lawn but our girls were still confident with the depth in the squad.

Jaimee Fourlis played Destanee Aiava in the number 1 singles matchup which was live streamed by Tennis Victoria. After a slow start, Jaimee looked like she was getting on top late in the first set but Destanee squeezed through the tie-break 7-6 before taking the second set 6-2.

Jess Moore started his match well against Belinda Woolcock taking the first set 6-2 but Belinda turned the tables in the next two sets recording a 6-4 in the third victory. It was a very high-level match with both having their opportunities in the final set.

At number 3, former world number 1 Cara Black was matched up against Sally Peers. It was a very entertaining match in which Sally came out on top 6-4 6-3. This match was quickly leveled up by Gabby DaSilva-Fik who took a straight-set win over Jasmine Starr.

So it was left to the doubles to decide the day with MCC Glen Iris needing to win both doubles matches. Jaimee and Jess losts a close first set, while Gabby and Cara went down 6-1 in the opening set. Despite being on top in the second set, play was brought to a close once Kooyong had taken an unassailable lead. Kooyong will now face Liston Tennis Club in Saturdays final at MCC Glen Iris with play starting at 12.30pm.

Thanks to all our women’s players who represented MCC Glen Iris this season and we look forward to the 2018’s season and seeing you all around the club. 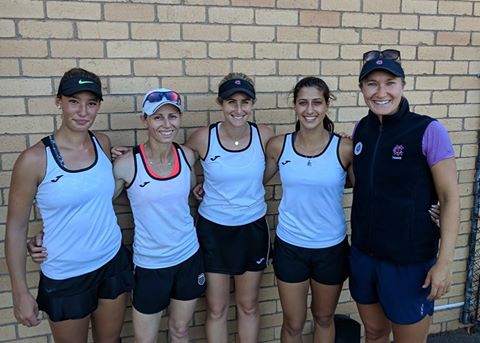