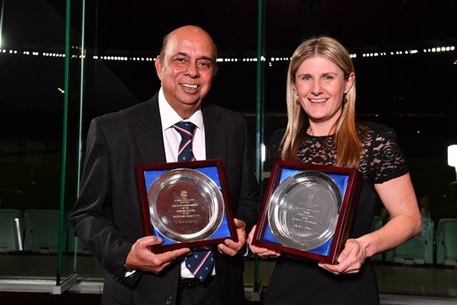 Congratulations Chiro Mukerjea on being honored with the prestigious Han Edeling Award at the 2022 MCC Sporting Sections Dinner.

Perpetuating the memory of one of the MCC’s greatest contributors as a player and administrator, the Hans Ebeling Award was introduced in 1981 to honor those who have given outstanding service to our Sporting Sections.

A quick snapshot of Chiro’s service to tennis & the club

Chiro has been a long-standing member of the legacy MCC Tennis Section, representing the Section in Pennant Competition for 17 years, during which he won pennant flags on two occasions – one in Men’s competition and one in the Seniors section. Prior to this, Chiro had a
very accomplished record on the international tennis tour, which included participation in the main draws of Grand Slam events as well as representing India in the Davis Cup Competition.

He joined the Tennis Section Committee in 1996 and played an active part in the administration and activities of the Section at Junction Oval and Roy Street. He initially was the Pennant Sub-Committee Chair, and then took over as Section Chairperson in February 2014 and played an instrumental part, in conjunction with the MCC Committee and Foundation, in the negotiations, planning and execution of the merger with the Glen Iris Valley Recreation Club that was finalised in May 2016. This merger secured the future of the MCC Tennis Section which had lost its home base at Junction Oval. As part of the transition arrangements, Chiro subsequently took over as Chairperson/President of the merged MCC Glen Iris Valley Tennis Club in May 2017 and remained in this position for 5 years until June 2022.

Chiro has led the Tennis Section with distinction supporting and ensuring a seamless transition into the one club. Since his time on the Committee, he has mentored a number of members assisting them to join the committee and develop the club. Chiro has also led the Club through the difficult Covid 19 lockdown period and the period thereafter.

Chiro has been an active supporter of the MCC Multi-Sport tours to Hong Kong and Singapore and ensured that Tennis has been represented on each of these tours. He has also strongly supported the development of the top-level premier league men’s and ladies’ teams for the club.

All at MCC Glen Iris Valley Tennis Club wish to congratulate Chiro Mukerjea on being awarded the Hans Ebeling Award.