Our Premier League Captain drops in

Genevieve Lorbergs, our women’s team captain, drop by the club between Pro Tour events to see how some of our juniors were going.

Gen has been playing in Pro Tour events across Australia and Asia in 2017 and has improved her singles ranking to 696 and her doubles ranking to 386 in the world. Before life on tour, Geb had a great college Tennis career in the US attending the University of Central Florida.

The last two seasons on Premier League have seen our women’s team make the final on both occasions! She said yesterday, “we hope to be around the mark again this season. It is great to have Jess Moore join our team, who is a top 100 doubles player as well as having Zoe Hives back fully fit.”

Gen is pictured below with Aadarsh Kongara, a junior player at the club who has also seen a ranking rise in recent months. Aadarsh will go into the Melbourne Cup MCC Glen Iris JT as a seeded player in the boys 14&U main draw.

The Premier League season gets underway on Saturday the 11th of November with a super round at MCC Glen Iris on the 12th of November. 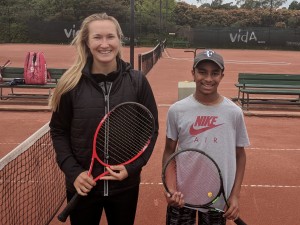