Premier League teams off to a good start

The weekend saw the start of the Premier League season and a solid start for our Men’s and Women’s teams with two rounds played, Friday night and Sunday afternoon.

In the Men’s league, MCC Glen Iris Valley were up against Grace Park Hawthorn in round one, who are looking for a four peat after dominating the league in recent years. Tennis Victoria wrote the following after the match;

“MCC Glen Iris Valley Tennis Club appeared on paper to be a major wildcard team this season with the likes of Blake Mott, Aaron Addison and Peter Luczak. True to their pre-league status they caused a major upset, defeating defending champions Grace Park Hawthorn Club in round one. On Sunday in Ballarat, MCC Glen Iris went on to show it was not just a one-off victory, defeating Dingley Tennis Club.”

Blake Mott partnered his coach Peter Luczak to get us off to a great start in the doubles with a straight-set win on Friday night. Aaron Addison and Paul Kramberger has many chances in their match, losing four sudden death deuce points in the second set. The teams were even on sets and games before the singles started, and on paper all matches looked very even. Blake was matched up against James Lemke who has been named Premier League player of the year 3 out of the last 4 years but he was able to have a tough fought win 6-3 in the third. Aaron also took three sets to get past Jarryd Maher at number 2, while Daniel Ferretti took a straight sets win at number 4.

The interesting match-up of the night was at number 3, Peter Luczak V’s Frank Moser. The two had first played each other in 1997 in College Tennis in America, and since that time, both had reached the top 100 in the world. Peter proved too strong on the night and helped guide our team to a 5 match to 1 victory.

The men’s team then headed to Ballarat for round 2 on Sunday where they had a hard fought 4 match to 2 victory against Dingley Tennis Club. It was great to see our junior players Lucas Vuradin and Michael Shepheard join the team for their first matches of the season. Singles victories to Blake Mott, Aaron Addison and Lucas Vuradin helped cap off a great weekend for the men’s team.

In the women’s league, Liston Tennis Club announced themselves as serious challengers, reversing and erasing the demons of their previous season’s Grand Final loss, defeating MCC Glen Iris Valley. In a tight match all night our women’s team went down 4 matches to 2. The number one singles match saw world number 192 Arina Rodionova take on our number one player Jaimee Fourlis in what man said was the match of the night. Jaimee won a tight straight sets match 7-5 7-6. Our captain Genevieve Lorgergs then kept the match alive with a stright sets victory at number three but it was not to be on the night.

Sundays match saw the girls play against the Dingley Tennis Club at Liston TC. A strong start in the doubles helped pave the way to a 5 match to 1 victory. Viktorija Rajicic moved into the number one singles position as injury forced Jaimee Fourlis out of the singles line up. Viki proved she was up to the task taking her singles match 6-1 6-1 in infatic style. Singles wins to Gen Lorgers and Mary Ann Liu capped off a solid win for the women’s team.

All matches will be at our club for both Men and Women. In what is called a “Super Round” and 6 matches will start at 12.30pm. It will a great opportunity for members to watch our teams up against the best players in the state. Players include: Ashley Barty, Sally Peers, Arina Rodionova, Jess Moore, Storm Sanders, Peter Luczak, Jo Sirianni, Andrew Whittington, Omar Jasika, Blake Mott, Marc Polmans, Greg Jones and more. There would be more than 50 Grand Slam appearances between all the players who will be at our club on the 4th of December. 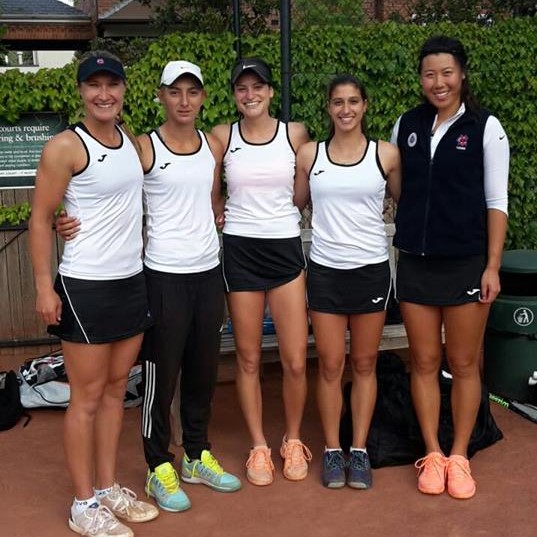