Premier League – The weekend in review

The 2017 Tennis Victoria Premier League season kicked off on Saturday with our Men’s team making the trip down the highway to Geelong to take on Kooyong Lawn Tennis Club. Kooyong was last years runner up’s and on paper looked to be a very tough matchup. One number 1 and 2 players, Harry Bouchier & Matt Reid, both arrive back from playing international event the day before and got off to a slow start losing their doubles in straight sets. But from there, our Men’s team rallied and was able to get the upper hand in the remaining five matches and take a convincing win 5 matches to 1. See the scores below;

The second round for the men was the following day, a home matchup against the Bundoora Tennis Club. We planned to field the same team but Matt Reid did not come up from the previous day’s matches and was a late withdrawal. The number 1 doubles went to a super tie-break with Harry and Michael lifting to take it 10 points to 2. From there, our men’s team was always in control taking the remaining matches in straight sets.

The men’s team will have a Bye next Saturday and then front up again Geelong Lawn Tennis Club at Royal South Yarra at 1pm Sunday.

Our Women’s team started their campaign on Saturday at the Liston Tennis Club against Dendy Park. Our new member of the team Jess Moore, currently ranking in the top 100 in the world in doubles, joined Jaimee Fourlis to record a straight sets win. One of our club’s up and coming junior players, Helena Spiridis, made her Premier League debut on the day recording a straight sets singles victory. After the doubles matches were split, the team stepped up a gear and took out all four singles matches in straight sets to take the rubber 5 matches to 1.

Round two was a home match for the women’s team and a rematch of last years Grand Final. One paper both teams looked very strong and the opening two doubles match lived up to expectations. Jaimee Fourlis teamed with Zoe Hives to win a close straight sets match. Zoe was fresh on winning the Pro Tour doubles event in Bendigo the day before and carried great form into the match. The number one match up say Liston level up the scorecard with a 7-5 6-3 win.

Injury forced both Jaimee and Zoe to sit out the singles, will Jess Moore was unable to play after flying to Asia the night before so it was left to new team member Abigail Tere-Apisah to lead the singles line up. All four singles matches were closely fought out with the the Liston girls getting the better of us by the end of the day.

The next match for the women’s team will be next Saturday against Royal South Yarra Tennis Club at Dendy Park. We will also welcome a former world number 1 player into our team’s line up when Cara Black joins us. The Sunday match will be a Bye for our women’s team.

Good luck next weend to both our teams. 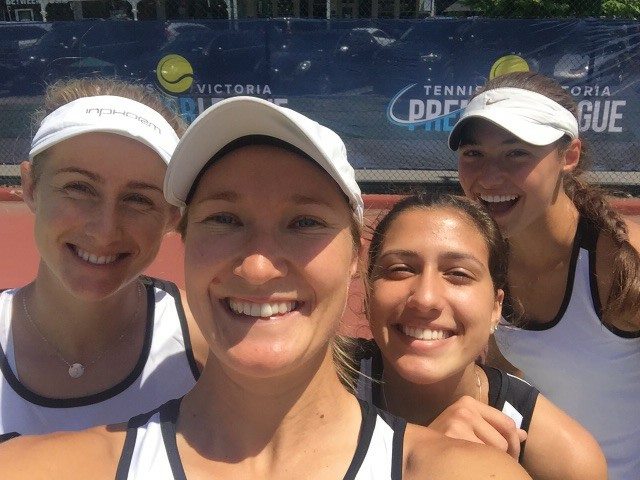